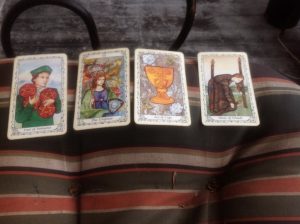 Today is the day to start that new project. You’ve built a stronger foundation and support base than you know. Take stock of your resources, including your connections, and look outside yourself to find the support you need to get your project off the ground.

—Full Interpretation After the Jump—

In the Environment position, the Four of Pentacles suggests that today I’m feeling stingy with my resources, holding tight to my energy and emotions. While many readers interpret this as a negative card, there are times when holding tight to what you have is an important defense position. It’s always important to be aware, though, that when you’re holding too tightly to what you already have, it can be difficult — if not impossible — to reach for more and better. The question is whether today is a day to hold on tight, or one where you’re already holding too tightly.

In the Unknown position, The Empress suggests that there is an element of creativity and birth hovering outside your current awareness, and that energy will have an effect on your day. For all the metaphysical underpinnings of the Empress card, she is the quintessentially practical card, concerned with the making a comfortable, emotionally welcoming home in the real world. Don’t be surprised to find yourself cleaning or rearranging your home or office today to make it more supportive of your creative side, or to suddenly be inspired to (or expected to) play hostess to friends or family.

In the Known position, the Ace of Cups introduces a new beginning. As cups are the suit of emotions, that beginning may be a new friendship or an attraction that can grow into something more. Coupled with the Unknown Empress, however, it could also mean that you will learn of an expected birth today. Those two cards coming next to each other often signify an actual pregnancy — but they could also mean the beginning of a new endeavor in which you have a significant emotional investment.

Quick Recap: Before going on to the Action card, let’s quickly recap and blend the previous cards. You’re currently in a situation where you’ve been holding tightly to what you’ve got, trying to conserve your resources.  You’re ready to begin — or may already have begun — a new project or relationship — and unknown to you, there are supportive, creative forces in a position to help you discover or move forward with a new direction or plan.

In the Action position, the Three of Wands is, in a very real sense, a call to action. You’ve laid the groundwork for a new project, both in ways you know and in many ways you don’t recognize. If you want to bring your project to fruition, it’s time to look at the supportive friends and others around you, take stock of your resources, and reach out. If you want to achieve your goals, it’s time to take a chance and take that first big step.

Today’s reading has some interesting numerological correspondences. The environment card is the 4 of Pentacles. The remaining three cards are threes and a one, the numbers that add up to four. That strongly suggests that the principles inherent in those three numbers have a special significance today, so let’s take a look at how they play together.

Ones represent beginnings. They also represent the id — the self part of your self. They also suggest creation and will power — not willpower, with its negative connotations of self-deprivation, but the power of the will to bring forth the results you want to happen. They can mean self-involvement and selfishness, but there is a place for both of those things, especially in the beginning of a new project.

Threes represent creativity. They are the culmination of the imagination of one and the germinating energy of two. In gardening terms, one is the seed, two is the nurture, three is the flower.

Fours represent practicality. At first glance, they seem diametrically opposed to the energies represented by ones and threes, but they form the framework on which you can build. Often seen as stodgy and set in its way — the quintessential “square” — they are the underlying practicality and practice that allow you to take an idea to the next level without having it collapse on itself.

Power Tarot is about using the Tarot as an empowerment tool to help you build the life you want to live. When used this way, the cards can help you gain insight into your own motivations and point you in the direction that will help you achieve your goals.