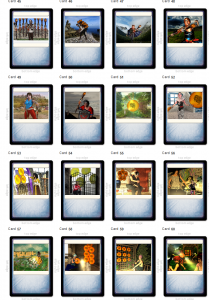 For years, I’ve dreamed of creating and publishing my own Tarot deck, incorporating the lessons I’ve learned about reading and empowerment along the way. The deck has developed in fits and starts over the course of nearly a decade, but the last few months, it has taken on a life of its own. It took nearly 10 years to create the collages for the Major Arcana – and less than eight weeks to create the images for the first three suits of the Everyday Powers Tarot deck. As the new year begins, I’m excited to share a sneak peek at the deck in its last stages of development. The image at the left is a screen cap of the deck in development, with images for some of the wands (staves) and coins (sovereigns).

More after the jump… 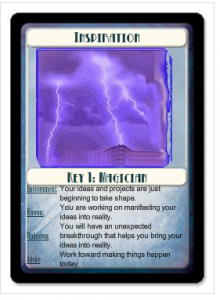 The Everyday Powers deck is specially designed for use with the four-card reading I developed for daily analysis and empowerment readings. Taking a cue from standard gaming decks, the face of each card will include a quick interpretation for that card in each of the four positions. Many of the images will look familiar to those who know the standard Rider-Waite deck. Others take some liberties with the themes to include my own interpretations and the lessons I’ve learned over the years.

The heading of each card, printed at the top, is a single-word key that names its major energy. I started doing this with the Major Arcana years ago. It was an easy way to call up the fuller interpretation, and helped me to organize and recognize the flow of concepts from one card to the next.

I hadn’t intended to carry the conceit into the Minor Arcana, but once I chose a format for the cards – any gamer will recognize the standard MTG layout – it suddenly made sense to continue it throughout the deck. Naming each of the minor cards forced me to crystallize my understanding of that card, clarifying and solidifying concepts I’d been fielding by instinct up until now. In some cases, it also led to a new understanding of the meaning and place of the individual cards in the flow of the suit and helped resolve little things that have always thrown a monkey wrench into my understanding of certain cards. 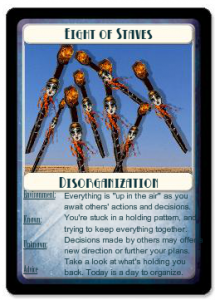 The eight of staves is a prime example. The traditional meaning of the card is “everything falling into place” or “rapid changes and advancement toward a goal,” but that interpretation doesn’t make sense no matter how you look at the card’s place in various progressions. The energy of the eight is one of repetition – it is the symbol of infinity, an endless loop. It signifies karma and obstruction – nothing in it speaks to an ending or real advancement. In fact, it is quite the opposite – lots of energy expended to go around and around in circles. Everything is up in the air and disorganized, and you can’t do anything until it all resolves. That interpretation brings the eight of staves into line with the eights in other suits – the eight of cups, with its theme of abandoning a long-term project; the indecision of the eight of swords and the lather-rinse-repeat busywork of the eight of coins. It also fits it neatly between the seven of staves – standing your ground against challenge and opposition – and the nine of staves, with its weary, wary defensiveness. 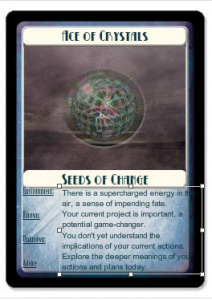 The biggest difference between the Everyday Powers deck and the traditional Tarot deck, however, is the addition of fifth suit – Crystals. The four traditional suits are keyed to the four elements – Earth, Air, Fire and Water – but alchemists and philosophers throughout the ages have postulated a fifth element, ether or spirit. Whatever they call it, they refer to a sphere outside our normal realm of senses, a plane of existence with a higher vibration than our own.

The suit of Crystals refers to that higher plane. The cards in it speak to the unknown, to the power of inspiration and genius, to the wild, chaotic energy that can destroy or create. Believing in it requires a leap of faith. The suit of cups belongs to artists, wands to warriors, swords to scholars and coins to merchants. The suit of crystals belongs to visionaries and dreamers, inventors and those who change the world around them with their ideas.

Over the next few months as I work to complete the Everyday Powers deck and the book that will accompany it, I’ll be sharing bits and pieces of the work in progress. My ETA for its completion is the spring equinox, and publication by the start of summer. Stay tuned for updates, and, as always, for discussion of Tarot and ongoing daily readings.
Everyday Powers Tarot is about using the Tarot as an empowerment tool to help you build the life you want to live. When used this way, the cards can help you gain insight into your own motivations and point you in the direction that will help you achieve your goals.